Here is some of the missing posts from February, March, April and May... 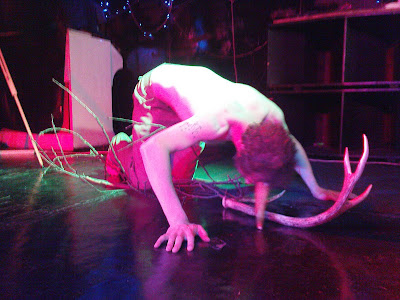 This month we had Sheer Zed who presented a mixture of songs, poems and sketches. He finished with a re-enactment of Alfred Hitchcock’s Psycho using fresh fruit which I greatly appreciated. We also had Wayne Myers who played the guitar. Wayne is a busker as well as running his own online comic you can read at www.conniptions.org

Another memorable moment was Duncan Ward’s strange performance art piece. Medieval songs and ceremonies influence Duncan’s work and this performance was inspired by the medieval artist Lucas Cranach the Elder. Duncan’s performances usually appear faithfully earnest and the whole pub fell respectfully silent as Duncan performed (see left). It was an unusual moment, but it is unusual moment like this that make these nights special. 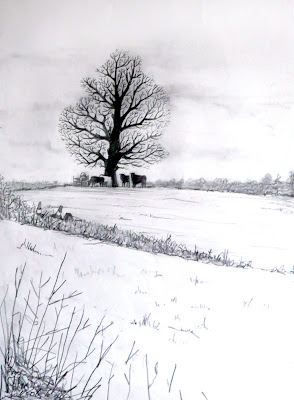 Next month we are taking it back to the Good Old Days with an Old Chap special featuring the return of Mr B the Gentleman Rhymer.

PLAY ON WORDS – April 16th 2008
This was another Lee Campbell show. It was in the Sainsbury Centre in Norwich so I used the opportunity to head back to my family home in Norfolk for a few days. I did a new series of landscape drawings while I was there (see left), but unfortunately the scheduling at the Sainsbury’s centre went a bit awry so I didn’t get to show them. Maybe next time I am invited to show in Norfolk… 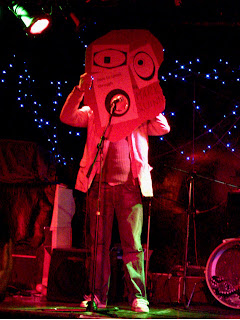 SECOND THURSDAYS – April 10th 2008
This month we had some cow boy clowns who were excellent. We also had Paul from London Met and his band Dirty Minimal. Uncle Jeep also returned with his guitar and a selection of hats.

Mark Quinn couldn’t make it for this show as he got his shifts mixed up at work so he sent he friend Stewart in a mask (see right) as a replacement. Stewart then relayed Mark’s comedy routine via mobile phone from Mark’s work. All went well until Mark was called to security search a customer’s bag during a joke about a peanut.

As part of the Second Thursday’s agenda to mix artists in with musicians and comedians, we ran our own artists residency program this month. Sam Curtis had previously run self initiated residencies in IKEA and Harrod’s Fish counter. This month I asked Sam to be artist in residence in the pub. We met on several occasions in during the month in the bar and talked about art and Sam’s ideas. 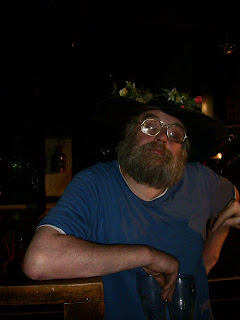 Sam’s first idea was to work behind the bar making art by pulling pints and collecting empties, but the bar staff said they didn’t need any help (see Martin collecting Jeep's empties, left) and suggested some other places he could earn money. When Sam said he would work for free the bar staff became suspicious of intentions to get into the secure areas behind the bar.

As a result Sam and myself discussed at length the cross-over between art and life. Sam’s art practice and art performances had become almost indistinguishable from everyday activities and mundane day jobs. This was clearly intended as a conceptual statement questioning what art and the role of the artist actually is. Ever since Duchamp turned a urinal on it’s side and called it art 90 years ago people have been asking ‘is it art?’ Sam’s questioning is even more relevant now as artist are increasingly employed in community art projects where you aren’t sure if the artist is supposed to be making art or doing some kind of social work. I suggested to Sam that something was needed to distinguish an activity as art; the really easy way to do this is to frame it in art gallery. Outside of the art gallery some other gesture is required to denote the significance of some thing, other wises it will be passed by unnoticed and just disappear. It needed to be unusual. It needed to be remarkable. Sam organised a motorcycle stunt outside the pub.

Sam also gave me some thoughts on Second Thursdays. He said he felt the illustrated posters I made were quite essential to the whole thing. As a bit of a change, this month instead of performing I made a book of illustration and stories and gave it out to people on the door (see below). 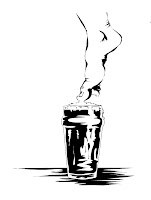 30 DAYS OF 30 PERFORMANCES – Saturday 29th March
This run of shows in the Sun and Doves in Camberwell curated by Mark McGowan and Guy Hilton was quite fascinating. Mark McGowan’s taste in performance can be quite provactive. The opening night saw a performance by Paulo Pevreira who had previously performed as Princess Diana in Mark McGowan’s re-enactment conception of Prince William. Paulo proceeded to take his clothes off and stick his finger up his bum and then pour treacle and feather over himself. 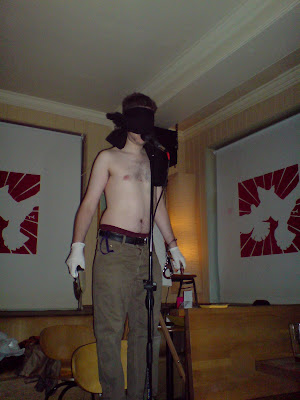 Mark and Guy had programmed different performance artists for each day for 30 day. The result of this is that not even the most devoted performance art lovers were realistically going to get to all 30 performances. By the end of the first week when Sally Bangs performed, she was dancing naked watched only by local pub regulars and office workers going for after work drinks. However attempts by performances artist to shock the audience into paying attention continued to escalate. On the final night I had to hide under the table as a group of drunken semi-naked art students smeared in Swafega were smashing up the pub and police had to be called to stop it.

I was scheduled half way through the run and had a Saturday afternoon slot and knew I would be entertaining Saturday afternoon football watchers and family lunches for six hours. We ran the Unwrong Quiz for the afternoon and I invited Daren Callow, Mark Quinn, Theo Morris and Thom Cutler down to help me fill the time. However I didn’t want to feel out done by the other more extreme performances so for my grand finale I brought blindfold, handcuff, lighter fluid, cigarettes, vodka and set of kitchen knives (see right).

There is a nice review on Daren Callow's blog.

ELEVATOR GALLERY – March 14th
This was a group show at Elevator Gallery I was asked to perform at following my appearance at Suburbia. On the down side, I got my iPod nicked. On the upside, one of the other artists brought a lifesize wooden Darlek and I got to achieve a lifetime ambition of being exterminated. I also tried to rig a David C West’s dogfight by feeding one of the dogs cans of Stella to make it fight more.

Lee Campbell also did a retrospective of some of his performance work. I have only started working with Lee recently and he certainly seems to be on his way up the art world food chain. His performances pieces consist of misinterpreted catch phrases and half remembered hook lines from TV theme tunes and pop songs. He takes that popular vain of performance art inspired by Samuel Beckett and he confuses all that nihilistic philosophising about repeating acts again and again with a much more contemporary passion for hearing mobile phone ring tones again and again.

SUBURBIA – March 1st
This was group show organised by Lee Campbell in the foreign press association. Here is the video. 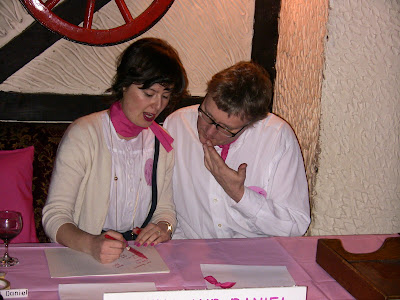 This month we had an excellent performance on the Accordion by Martin White. Uncle Jeep also came down and was as unstoppable as always. We took some photos of Jeep and one is going to go on his next CD ‘Country Ways’ (see below). Daniel and Davina also came and wrote Valentines Cards to people in the pub (see left). This was a really great piece of work as it was the first time we had got performers working in the bar area rather the usual stage based stuff. I want to get more of this kind of thing happening. 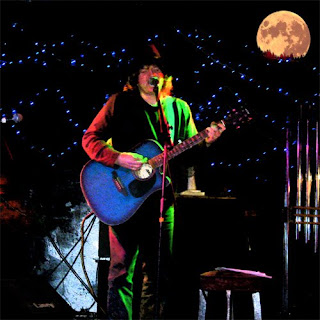